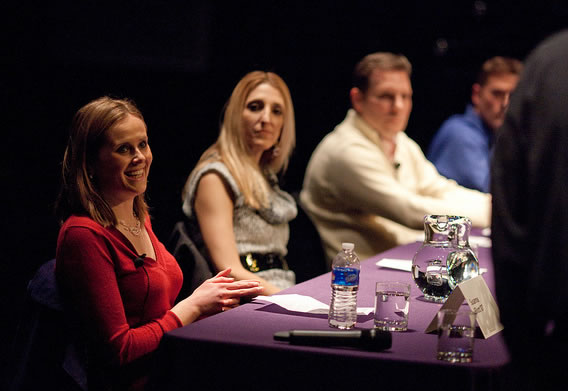 If you’re a well-respected brand leader, than your voice is “I” or “we” (“I’m predicting that…” or “We will be focusing our next product line on…”). People want to hear from the leader what’s next straight from the source. It makes them feel part of the conversation. That’s why Facebook business pages for brand leaders are generally well-liked by large numbers – people want to be in the know.

If you’re just starting out then your voice is “they” (“They say that the best widgets are made by…”). Your voice doesn’t have authority, but you want to leverage well respected “names” to support your own voice. So you point to others for validation, and include your offering as part of the conversation (“…so that’s why we’re proud to offer you…”).

If you’re trying to create a social movement, your voice is “us” (“If you care about …. join us …”). You’re not establishing yourself as a leader, but you’re a part of the leading edge people who are already committing to take action.

If you’re trying to appeal to the leading edge influencers, use the “you” voice (“You are wise to notice that our new offering…”). Influencers want to see things first, so use a voice that recognizes their specialness.

If you’re trying to appeal to a mass market, use the “they” voice (“They know value when they see it”). Point to the leaders who already have validated it to have the “followers” feel like they’re not risking anything to purchase your product or service.

If you’re appealing to the laggers (slow-to-change), use the “us” voice (“Join us and see how much better…”). The late-to-change group want no risk, and easy adoption. Make your offering the obvious best-of-class choice.