I read this on a marketing website “If you want people to read what you have to say on your website, you must start each webpage with a compelling headline and use sub headlines to keep your visitors reading your text”

I am developing a web site and need to headlines for the front page. We are a call center for outsourcing telemarketing inbound and outbound services. We are nationwide and have the top technology in the industry. Our service is superb and we have a state of the art facility.

Any suggestions for headlines to the front page introduction to us headline, then a secondary headline with what content would be most important? If you were going to outsource to a call center what would you be looking for?

Is Your Business Overwhelmed With Phone Calls?
Tired Of Answering The Phone?
Tired Of Cold-Calling?
Rather Be Working Than Calling?
Wasting Too Much Time On The Phone?
We Love To Find You New Customers
Because Calling Isn’t Everyone’s Cup of Tea
Leave Phone Calling To the Pros
Do What You Do. We’ll Answer The Phone.
Stop Phone Interruptions.

I have recently joined in marketing department of a company which is into manufacture of cement. The brand is good but is a bit more costly as compared to the brands of other competitors. It is justified by the good quality our cement have. But what is the best way to send this message to the consumers through our communications? And what promotions could be run to support the brand?

What specifically does an improved quality of the cement mean? Durable? Less likely to crack? More/Less flyash?

You need to highlight the key benefit(s) to the consumers. For example, if the cement is more durable, that would translate into stronger, more lasting foundations (that won’t need to be replaced as often). Perhaps it’s able to withstand acid rain, etc.

If it’s less likely to crack, then it’s great for both interiors (where a large surface area is hard to create) as well as for earthquake prone areas.

The key is to identify what the consumer cares about for cement in general, and therefore highlight the benefit (especially when you have to get over the price concern).

The other day I received a postcard in the mail that was clever. The postcard was personalized with my name front and back. It pointed me to a URL which also included my name: myname.company.net. When I followed the URL the landing page greeted me with my name as well. This was I imagine done with a single technology that generates the postcard and the web site address and populated the page with my name.

The personalized postcard was produced using variable data printing (VDP). A number of companies also package VDP with direct marketing (as you saw). Here are some leads: 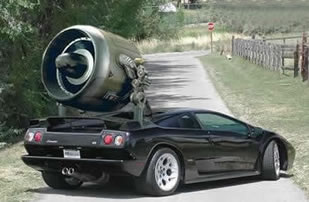 Let’s say that business is slow, so you want to market a new product you’re selling. How can you get the word out “yesterday” and get measurable results?

Direct mail. A simple flyer can be created in a day or so. Printing and attaching labels (if you do this in-house) is another day or so (depending on your mailing list size). If you’re sending via bulk mail, or you need to use a printer’s services to print postcards, etc., you’ll need more time. Minimum time until seen: 1 week.

Print. If you already have a regular print campaign (in a publication), then it’s simply a matter of creating the new advertisement and waiting until the next submission date. Minimum time until seen: 3 days (for a daily publication).

Radio/Television. If you already have a campaign, then you need to record (and edit) a new message. If you need to create an ad, it’ll take time to interview agencies, hire talent, negotiate contracts, etc. Minimum time until seen: 2-3 weeks.

Press Release. To create a press release and submit it to the “wire” takes less than a day. There’s no guarantee that your press release will ever be published.

Blog. Respond (on-target) to a well-visited blog and introduce your solution. Minimum time until client contact: immediately (if your comment is approved).

Telephone. You can start calling your existing clients as soon as you’ve crafted your “message”. Minimum time until client contact: immediately (once you’ve got them on the phone).

Email. You can start emailing your existing clients as soon as you’ve crafted your “message”. Minimum time until client contact: 1 hour.

Internet Pay-Per-Click (or Pay-Per-Action). Creating a campaign is as simple as signing up, bidding on your keywords, and establishing an account. Minimum time until seen: 1 hour (immediately, once the account is established).

Internet Viral Video. Create a (series of) funny or novel (short) videos. Upload them to a free video directory. Start blogging (or have your friends blog) about the video. Minimum time until seen: immediately (once you’ve uploaded it and told people about it). 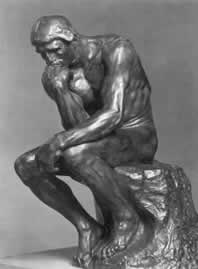 Many people have been commenting about Frans Johansson’s The Medici Effect:

“Brainstorming [is] used in nearly all of the world’s largest companies, nonprofits, and government organizations. And the reasons seem obvious… “The average person can think of twice as many ideas when working with a group than when working alone.”… But is it true?

In 1958… psychologists let groups of four people brainstorm about the practical benefits or difficulties that would arise if everyone had an extra thumb on each hand after next year. These people were called “real groups” since they actually brainstormed together. Next, the researchers let “virtual groups” of four people generate ideas around the “thumb problem”, but they had to brainstorm individually, in separate rooms. The researchers combined the answers they received from each [virtual group] individual and eliminated redundancies… They then compared the performance between real groups and virtual groups…

To their surprise, the researchers found that virtual groups, where people brainstormed individually, generated nearly twice as many ideas as the real groups.

The result, it turned out, is not an anomaly. In a [1987 study, researchers] concluded that brainstorming groups have never outperformed virtual groups. Of the 25 reported experiments by psychologists all over the world, real groups have never once been shown to be more productive than virtual groups. In fact, real groups that engage in brainstorming consistently generate about half the number of ideas they would have produced if the group’s individuals had [worked] alone.

In addition, in the studies where the quality of ideas was measured, researchers found that the total number of good ideas was much higher in virtual groups than in real groups.”

I’ve found that interactive brainstorming groups generally suffer from the “too loud, too fast” phenomenon.

Groups tend to be dominated by the most vocal people. When someone else is talking you’re trying to balance listening to their ideas and thinking about your own. Furthermore, “group extroverts” can be intimidating.

The goal of brainstorming is to come up with as many ideas as you can as quickly as possible. The idea is by working quickly, you prevent the inner critic from stifling a (part of a) new solution. This means that the group operates a certain speed (which varies during the meeting, but it’s the goal of the facilitator to reduce the “lows”). One speed doesn’t work for all, frustrating both the quicker and the slower thinkers.

As a result, “real” brainstorming meetings aren’t harnessing the full creative power of the group.

Virtual groups don’t suffer from “too loud, too fast”. It operates at your speed, and is much more comfortable. In a parallel virtual group, each member goes to a different location for fifteen minutes and writes down ideas, then combines them into a single list. In a sequential virtual group, each member thinks for fifteen minutes, and passes their ideas to the next person, who then adds their ideas to the list. Examples of this are online bulletin boards and blog discussions.

Does this mean that you should discontinue “real” brainstorming sessions? Yes and No.

No, don’t lose the human-ness of the meetings. The goal of the group is to continue to evolve into a community, working together to solve problems.

I love seeing creative signs that underscore a business’s message. Here are a few to get your creative juices flowing:

Curtis Carlson (president/CEO of SRI International) and William Wilmot (director of the Collaboration Institute) share their system for innovating in business. While the book is written for larger corporations, their message translates to all types of businesses.

The book details their five disciplines and provides supporting stories. The authors claim that the chance that you’ll succeed is directly proportional to using all five disciplines simultaneously. Failing to address one of them will doom you to failure.

1. Important Needs. Your product or service must target a customer value (as opposed to a company, shareholder, employee, or public value). A customer’s value = benefits – cost. You can optimize either the benefit or the cost to achieve high value. Likewise, you can compare values using the formula: Value Factor = benefits / cost.

3. Innovation Champions. You need people who are passionate and committed. In a small business, this responsibility falls to the owner. One of the challenges in growing your company is finding employees (or partners) who share your “champion-attitude”.

4. Innovation Teams. To innovate, you need collective intelligence. In a corporation, you would have the team all in-house. As a smaller business owner, you’ll need to create your own ad-hoc innovation team in networking, mastermind, or friendship groups.

5. Organizational Alignment. Upper management needs to remove barriers and provide organizational support. This is the advantage of smaller businesses; the organization has a flat hierarchy and people are aware of their fellow team members.

I recently read “The Luck Factor” (Dr. Richard Wiseman), a scientific study of luck. After three years of study, Dr. Wiseman determined that “Luck is something that can be learned”. His research boiled down to four principles:

It’s all about changing our (business) attitude. Focus on the positive. Smile. Be thankful. Help others. Trust. Breathe deeply.

If you don’t have the luxury of others to brainstorm with, one technique you can use is mind mapping. Mind mapping, used for centuries, is a graphical way of recording, organizing, and displaying your thought process. It is a simple and fun tool for doing solo creative problem solving.

How To Make Your Own Mind Map 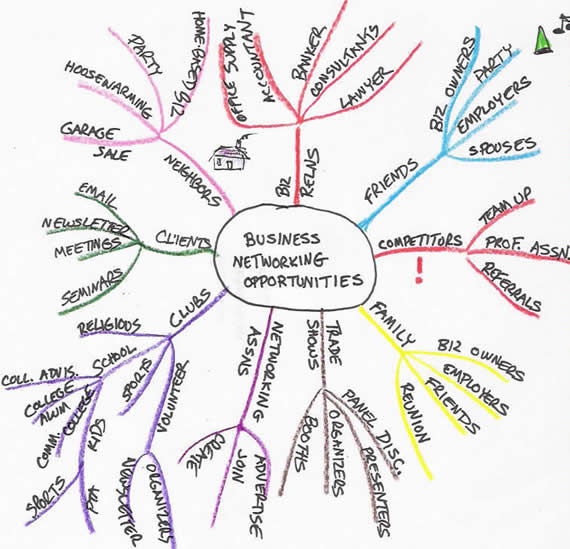 An overview of mind mapping

A brief introduction to mind-mapping, written by a college guidance counselor, with emphasis on using mind mapping to help you find a job. 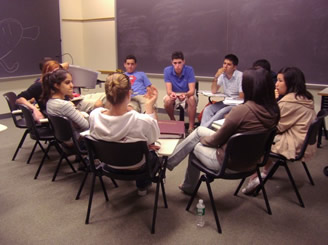 You need to get really clear on what your problem truly is (and is not). Keep asking “why?” until you feel that you’ve identified the root of your problem. For example, if your problem is “I need more money?” Ask “Why? To do what? And then what?”. Once you have the problem, state the brainstorming topic as:

The more time you spend in defining your problem the better the results will be.

Now is when the group starts contributing ideas. The group should some pre-agreed rules. Here are some:

Make sure you have someone responsible for recording the meeting (that person should definitely not be the person who’s presenting their problem).

Brainstorm for a set time. Initially, a lot of obvious ideas will be suggested. After this initial flurry, things will quiet down. Be patient. Risk saying something that makes no sense to you. The better ideas usually arrive after people have relaxed and listened to others.

Here is where the solutions that were suggested can be evaluated. What ideas are the most exciting? If any of the ideas seem incomplete, go back to step 1 and re-brainstorm.

Remember that brainstorming can be an intensely intimate encounter. Thank everyone for their contribution.